From Zelda Dungeon Wiki
Jump to navigation Jump to search
Want an adless experience? Log in or Create an account.
Swift Sail 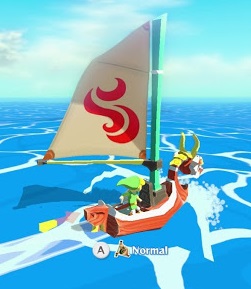 Sailing with the Swift Sail

The Swift Sail is an item that appears in the HD remake of The Wind Waker. It is an upgrade to the original Sail that is available later in the game.[3][4] Just like the normal sail, it allows Link to travel across the Great Sea on the King of Red Lions. However, the Swift Sail moves the boat a lot faster and is always filled with wind, so Link does not have to play the Wind's Requiem to make the wind face where he is going.[2][5][6] However, he cannot use it during the Boating Course game.[7] Although it is similar in appearance to the original sail, the design on it is red instead of blue.

Link can hear about the Swift Sail from the Fishman at Eastern Fairy Island, who tells him it is one of the prizes available at the auction held in the Auction House on Windfall Island.[8] It can be selected for the night's auction by Zunari after Link completes Dragon Roost Cavern.[9] The bid starts at 100 Rupees and increases as more people bid.[1]

According to Eiji Aonuma, the boat could not go any faster in the original Nintendo GameCube version due to the fact that the world could not load quickly enough to keep up with it, but the Wii U's advanced power makes it possible.[10]