From Zelda Dungeon Wiki
Jump to navigation Jump to search
Want an adless experience? Log in or Create an account.
Six-Eye Reef 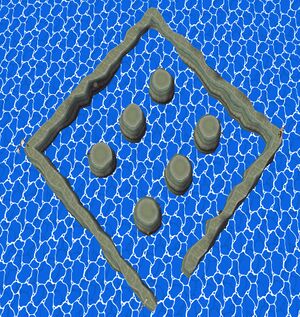 Six-Eye Reef, the sixth and final of the Eye Reefs, is located two squares south of Windfall Island. Directly to the west is Cyclops Reef, to the east is the Tower of the Gods, to the north is Northern Triangle Island, and to the south is Southern Triangle Island. It has a square outer shape and six stone pillars in the middle, giving it the shape of something with six eyes, or the 'six' side of a die. Once Link destroys all of the cannons protecting this island, a treasure chest will appear holding the Treasure Chart that leads to the Octo Chart.