From Zelda Dungeon Wiki
Jump to navigation Jump to search
Want an adless experience? Log in or Create an account.
Pawprint Isle 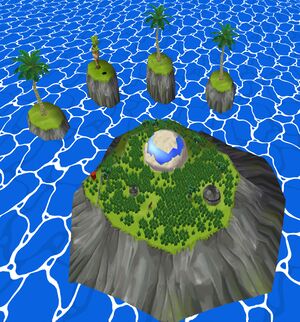 Pawprint Isle is one of the islands in the Great Sea in The Wind Waker.

Pawprint Isle is located one square east of Windfall Island on Link's map. The island is actually made up of five small plateaus coming out of the water, forming the shape of a pawprint. This small island has two different hidden caves that are full of treasure. A Mailbox can be found on the island, as well as a sign, indicating that Dragon Roost Island can be found up ahead.

The island is known for the enemy ChuChus that can be found inside the caves. Doc Bandam, owner of the Chu Jelly Juice Shop on Windfall Island, occasionally journeys out to Pawprint Isle to collect some Chu Jelly to make his potions.[1]

In the waters surrounding the island there is a Piece of Heart, which can be found by using Treasure Chart 30, located within the Tower of the Gods.

On the main part of the island, the palm of the pawprint, is a large blue and white orb. There is some overgrown grass that surrounds this orb. Link can use his Sword to cut down the grass, revealing an entrance to the cave. If Link crawls into the orb, he will drop underground into a cave that is full of Red Chuchu. If he defeats the ChuChus and explores a bit, he will acquire some Red Chu Jelly. The cave has a threasure chest, where Link will find a Piece of Heart. Two additionally treasure chests can be found behind large boulders that can be blown up with Bombs, revealing a a Joy Pendant and a Purple Rupee.

The second cave on this island is a little harder to find, and cannot be accessed early in the game. Link must first have the Hookshot (found inside of the Wind Temple) to climb onto the parts of the island that look like the pawprint's fingers. If Link uses the Hookshot on the palm trees on these islands, it will lead him to another hidden cave. Inside that cave is a silver Rupee protected by Wizzrobes.

Jump attack onto the northeastern rock shaped like a ChuChu to make this Blue ChuChu appear.