From Zelda Dungeon Wiki
Jump to navigation Jump to search
Want an adless experience? Log in or Create an account.
Dragon Roost Cavern 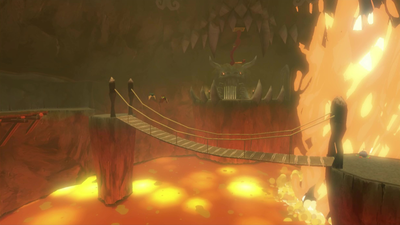 The Dragon Roost Cavern is the first major Dungeon in The Wind Waker. It is located inside the large mountain on Dragon Roost Island.

The Sky Spirit, Valoo, resides atop the large mountain on Dragon Roost Island. Link journeys inside of Dragon Roost Cavern in hopes to scaling the peak of the mountain and calming down Valoo.[1]

When Link arrives inside the cavern, he'll find that it is infested with many Moblins, Bokoblins and other monsters. Link initially traverses the mountain to follow Medli, a member of the Rito tribe. Medlie was captured by Bokoblins and is being held prisoner outdoors, just below where Valoo is found. She is being guarded by a pair of Green Bokoblin, as well as an enemy Moblin that is dropped in. After defeating the enemies and rescuing Medli, Link receives the Grappling Hook.

Dragon Roost Cavern is filled with lava and fire-based enemies and obstacles. Link will encounter Fire Keese flying around, as well as enemy Magtails, which crawl around in the lava. Throughout the dungeon, there are numerous Fire Geysers, that shoot out lava from walls or from down below. Link will have to avoid these geysers, but at times, uses them to his advantage by dropping Water on top of them. When water is dropped on the lava, it solidifies, creating platforms that allow Link to navigate across.

After clearing the dungeon, Link returns to the base of the mountain after calming Valoo to receive Din's Pearl from Komali, who apologizes to Link.

Gohma serves as the boss of Dragon Roost Cavern. Gohma can be found in the chamber just below where Valoo is located and it revealed that Gohma is the reason why Valoo is in distress. Gohma has been pulling on Valoo's tail from inside, causing Valoo to become enraged, which has caused destruction around Dragon Roost Island and has prevented the young Rito from scaling the mountain to acquire a Scale.

In the first phase of the battle, Link can use the Grappling Hook on Valoo's tail, causing a the large boulder attached to it to drop, landing on top of Gohma and destroying some of its armor. After repeating this process three times, Gohma's armor will be completely destroyed. At this point, Link can then use the Grappling Hook on the eye of Gohma to pull him closer. After numerous strikes with the Hero's Sword, Gohma will be defeated, leaving behind a Heart Container.