From Zelda Dungeon Wiki
Jump to navigation Jump to search
Want an adless experience? Log in or Create an account.
Tingle Island 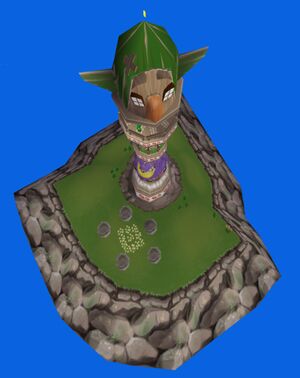 Tingle Island is one of the islands in The Wind Waker. It is located one block west and one block south of Windfall Island. On this island lives Tingle, who Link had rescued from Windfall Island's prison, and his three brothers, Knuckle, Ankle, and David Jr.. When Link must collect all the Triforce Charts, they are currently unreadable to him. To solve this problem, he brings the maps to Tingle, who translates them for a price of Rupees. On the island are five stone slabs and a giant totem pole-like thing with a carved head of Tingle on top. For each of the slabs is a statue to go on it, but the statues can only be obtained by using the Tingle Tuner. The tower is said to have been built by Knuckle when he was ten years old. Also, Tingle claims that the tower spins because of the fairy magic inside of it, but it's really just his brother endlessly pushing it around and around. This island is a warp point when using the Ballad of Gales.

Near the island is a 12-eyed Big Octo, and when defeated gives Link a Piece of Heart.

The Blue ChuChu is near the small, wooden sign.