From Zelda Dungeon Wiki
Jump to navigation Jump to search
Want an adless experience? Log in or Create an account.
Ballad of Gales

The Ballad of Gales is one of the many songs from the Zelda series, appearing mainly in two of the games.

The Ballad of Gales is most known for its appearance in The Wind Waker. In this game, one of the Wind Gods, Cyclos, became angry when his sacred monument was destroyed. To punish whoever ruined his monument, he travels around the Great Sea creating cyclones and capturing sailing ships, only to transport them to another place far from where they were. His older brother, Zephos, became worried about his sibling, and asked Link to help. Once Link obtains the Hero's Bow from the Tower of the Gods, he is able to shoot Cyclos out of one of his cyclones. Cyclos takes a liking to Link, saying that no one has even seen him in the cyclones before, much less shot him with an arrow. He teaches Link the Ballad of Gales which gives him the power to control the cyclones, giving him the ability to quickly teleport himself across the Great Sea. 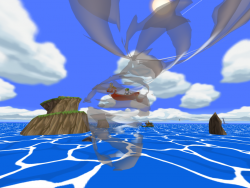 The Ballad of Gales can warp Link to nine different locations, all scattered throughout the Great Sea. This makes it helpful to travel quickly around the ocean. The different warp points are:

The Ballad of Gales returns in Twilight Princess, this time as one of the songs that Wolf Link howls to summon the Golden Wolf, who appears on Snowpeak.