From Zelda Dungeon Wiki
Jump to navigation Jump to search
Want an adless experience? Log in or Create an account.
Zephos 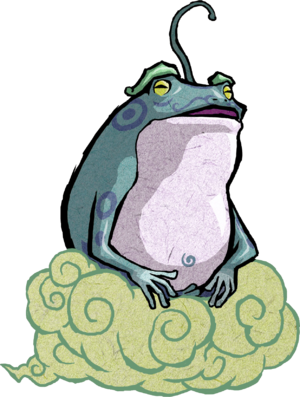 Zephos is a character from The Wind Waker.

Zephos is one of the frog-like Wind Gods in The Wind Waker. After Link reaches Dragon Roost Island, he will acquire the Wind Waker from the King of Red Lions. Link can then walk through a small tunnel to the back of Dragon Roost Island, where there are a pair of tablets. This is the Wind Shrine and one of the tablets has some symbols on it. After playing the song with the Wind Waker, Zephos will appear and greets Link, referring to himself as the God of Winds.[3]

The other broken tablet at the Wind Shrine belongs to Zephos' brother, Cyclos. Zephos will tell Link he's got a nice wind sense and that he likes him.[4] Zephos explains to Link that the song he just learned is the Wind's Requiem and it gives you control over the direction that the wind blows.[5]

Zephos also mentions his brother, Cyclos, citing that his brother as an example as how wind can be used in a bad way.[6] The statue next to Zephos' belonged to Cyclos and it has been broken. This has angered Cyclos, so he spends his time creating cyclones to torment people on the Great Sea.[7] Zephos suggests that if Link meets Cyclos, that Link should torment him in return.[8] This information is instrumental in getting another song on Link's quest, the Ballad of Gales.