From Zelda Dungeon Wiki
Jump to navigation Jump to search
Want an adless experience? Log in or Create an account.
Joanna 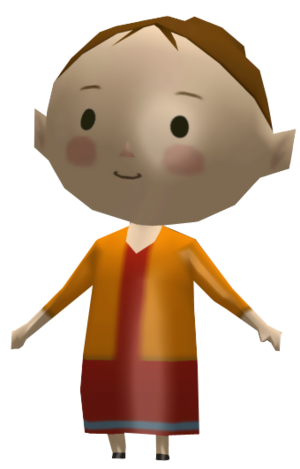 Joanna in The Wind Waker

Joanna is a little girl in The Wind Waker that lives on Windfall Island.

Joanna who is one of the two little girls, along with Potova, who spread rumors on Windfall Island. Joanna thinks she's super cute, but that doesn't mean Link can come up and bother her.[1] Joanna tells Link that no matter how much money he gives her and Potova, they won't tell him anything.[2] Not even for 2 Rupees.[3] After Link agrees to give them 2 rupees, which the split, one rupee for each, two the still refuse to tell Link any rumor.[4][5] However, Joanna and Potova cannot resist and will eventually give in and tell Link a rumor.

Joanna attends school at the School of Joy of Windfall Island, which is taught by Mrs. Marie.

Many characters from The Wind Waker have alternate versions of themselves in The Minish Cap. While she has a different name, Joanna has a strong resemblence to Berry from The Minish Cap.