This article is about the character in The Wind Waker. For the gravekeeper in the Zelda series, see Dampé. 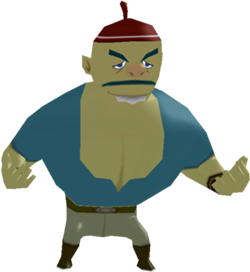 Dampa is a character on Windfall Island in The Wind Waker.

Dampa is a sailor who can be found standing near the Bomb Shop. He is Missy's son.

Dampa has three pet pigs that acn be found wandering around outside, just outside the Bomb Shop.[1] Dampa lets them loose to graze around, but it causes him stress as he is constantly worrying about them.[2] Dampa doesn't look like it, but he is a very wealthy individual.[3]

After Link offers him three Skull Necklaces, a treasure he's quite fond of,[4][5][6] Dampa allows the hero in green to partake in a mini-game. This involves rounding up Dampa's three pigs, which are scattered all around Windfall Island. The reward for catching all three pigs within the given time period is a Purple Rupee. As long as Link has three Skull Necklaces, he can play this game as often as he likes.

At nighttime Dampa can be found at the Cafe Bar, sitting down and having a drink with Kane. He enjoys just relaxing and having a drink after a long day's work.[7] Unlike the other sailors who appear at the Cafe Bar, Dampa doesn't seem to be concerned when Tetra's Pirates come on board the island during the Endless Night. He still enjoys his refreshment and thinks the pirates are just looking for some relaxation. There aren't cafes like this on the high seas.[8]