From Zelda Dungeon Wiki
Jump to navigation Jump to search
Want an adless experience? Log in or Create an account.
Loot 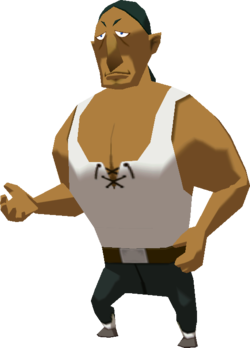 Loot is a character that appears in The Wind Waker.

Loot is a sailor who during the daytime, can be found on the Boating Course island.

In the evenings, Loot travels back to Windfall Island and can be found within the Cafe Bar. Loot has a fear of the Fishmen who can be found all throughout the Great Sea. On his travels he tossed some extra All-Purpose Bait out into the water.[1] To his surprise a giant fish appeared, gobbling up the bait that was dropped. Although he comments that it was no ordinary fish, as it had a human-like smile on its face.[2] He comments that since the Great Sea is so vast, there are many mysterious things that we've never even dreamed off that lie down below.[3]

Despite the Fishmen actually being helpful, Loot encourages Link not to throw any All-Purpose Bait into the water. He worries that the Fishmen might appear and pull you underwater.[4]

During the Endless Night, when Tetra's Pirates come ashore at Windfall Island, Loot will mention that he saw the stern-looking pirate ship sailing straight for the island.[5]