From Zelda Dungeon Wiki
Jump to navigation Jump to search
Want an adless experience? Log in or Create an account.
Maggie's Father 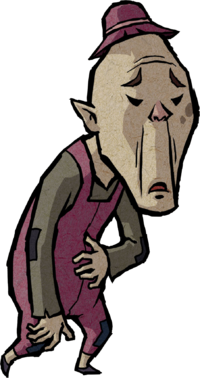 Maggie's Father is the father of Maggie, who lives on Windfall Island in The Wind Waker.

When Link first meets him, he is the poorest man on Windfall Island. He begs Link to help his daughter, who was kidnapped by the Helmaroc King and taken to the Forsaken Fortress.[1][2] He complains about how he is unable to make money without his daughter, and he wants them to pay.[3][4]

However, later, after Link saves Maggie from the fortress, she returns with many Skull Necklaces from a Moblin named Moe.[5] By selling them he becomes very rich and moves into the Auction House.[6][7] Rather than acting like a helpless old man as before, he treats Link poorly, calling him an "urchin" and constantly emphasizing his large amount of money.[8][9] He also becomes obsessed with Skull Necklaces, always looking for more to sell.[10]

Link can offer Skull Necklaces to him to sell.[11] If Link brings him more than twenty, he is very pleased and gives him a small tip of Rupees in exchange.[12][13]