From Zelda Dungeon Wiki
Jump to navigation Jump to search
Want an adless experience? Log in or Create an account.
Laruto 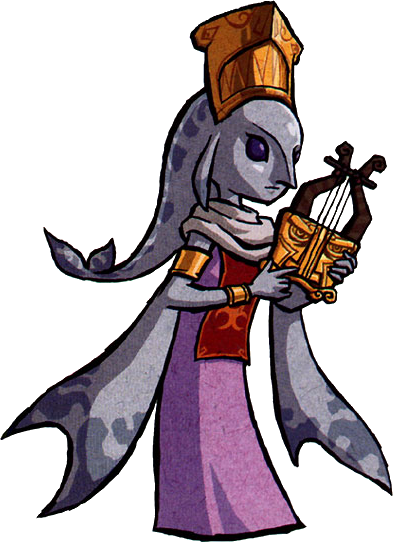 Laruto is a Zora who appears in spirit form in The Wind Waker. She was one of the two sages responsible for keeping the Master Sword able to repel evil.[1] Knowing this, Ganon ensured her demise in order to destroy the Master Sword's power, commanding Jalhalla to kill her.[2] Her spirit resided in the Earth Temple, awaiting the arrival of the Wind Waker.

Laruto appears to Link after he conducts the Earth God's Lyric found on a large stone slab blocking the entrance to the Earth Temple. Laruto tells Link that he must search for her descendant and successor, the one who continues her bloodline and carries the same harp she holds, in order to restore power to the sword.[3] She instructs him to play the song for the new sage when he finds them.[4] Her descendant is Medli, a young Rito girl living on Dragon Roost Island who Link had assisted before.[5] Upon conducting the Earth God's Lyric to her, Medli collapses and experiences a vision of Laruto, who awakens her to her destiny.[6]

After Link defeats Jalhalla, he places the Master Sword in the center of the room and conducts the Earth God's Lyric to Medli. Laruto is seen playing the harp next to her and the Master Sword regains some of its lost power. Laruto is not seen again after this event.

Seeing as how Laruto only appears in cutscenes, there is no way to manually take a pictograph of her. Instead, Laruto's Figurine can be acquired from Lenzo, who sells a pictograph of Laruto (who he refers to as the Earth Sage[7]) as one of his Legendary Pictographs. In the original, he sells the pictograph for 50 Rupees; in The Wind Waker HD, he sells it for 150 Rupees. In both games he sells this pictograph while the moon is in its first quarter phase. Also, this pictograph only becomes available after Link has encountered Laruto in a cutscene.