From Zelda Dungeon Wiki
Jump to navigation Jump to search
Want an adless experience? Log in or Create an account.
Nudge 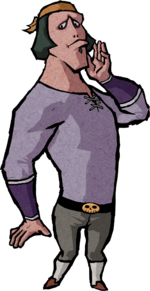 Nudge is one of Tetra's Pirates in The Wind Waker. He is one of the tallest pirates, and he guards Tetra's room on board the Pirate Ship. When Link attempts to enter Tetra's room, Nudge denies him access.[1] Due to qualities such as this, he is Tetra's most trusted advisor, and often counsels her in decision making. Additionally, he is well known for his sense of humor, and is actually stronger than Gonzo, which makes him Tetra's strongest pirate. He is also talented at sewing.[2] If Link speaks to Nudge, he jokes that Tetra is actually 35 years old.[3] During the ending, he is seen steering the Pirate Ship.