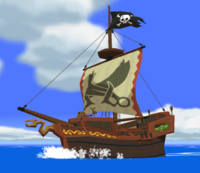 The Pirate Ship is a location in The Wind Waker and Phantom Hourglass. It serves as the mobile base of operations for Tetra and her pirate crew. It can be entered twice as part of the plot of The Wind Waker.

The ship is a fairly standard pirate ship. It has a single mast with one large sail, a crow's nest above that, and the flag at the top of the single mast. A raised part of the ship at the front serves as a storage chamber for the catapult, which can be used to launch barrels (with live humans inside) at fortresses in order to infiltrate them, or heavy rocks at airborne targets. A raised part at the back is where the steering wheel is located. Four cords connect the spearing beam, back rail, and either side of the top sail support beam to the top of the mast.

The interior of the boat contains three rooms. One is the central room that contains a door to Tetra's room and the door to the basement of the ship. Tetra's room is considerably more well-decorated than the other rooms, due to the fact that she is the captain. On her walls, she has a picture of a woman who is likely her mother, a map depicting the three Triangle Islands, Dragon Roost Island, Forest Haven, and Greatfish Isle, as well as lines drawn in such a way as to create a Triforce by connecting the islands, all surrounding the Tower of the Gods. She also has two pieces depicting the Hero of Time as seen in the opening cutscene.

The basement room contains a number of platforms on the ground, and seems to serve no purpose aside from storage. At the end opposite the entrance is the Spoils room, where all the treasure is kept. Inside here, after Link completes two challenges from Niko on two separate occasions, he gets the Bombs and the Spoils Bag.

In The Wind Waker, the ship first appears while it is chasing the Helmaroc King, who has kidnapped Tetra. An accurate shot from the catapult knocks out the bird, causing it to drop Tetra. After Tetra has been rescued, it serves as transportation to the Forsaken Fortress while Link completes the Basement Room challenge for the first time, learning how to swing on ropes in the process. While on the ship the first time, Tetra's room is inaccessible.

The ship next appears in the story at Windfall Island, docked near where the gravestone is located. All the pirates are inside the Windfall Cafe except for Niko, who requires a password to enter. Once inside, Link can visit Tetra's room before proceeding down to the basement to complete the second challenge, allowing him to earn the bombs. Presumably, after that, the ship makes its way to Outset Island in order for Tetra to obtain Nayru's Pearl. Between this and its last appearance, the ship is used to transport the prisoners after they have been rescued from the Forsaken Fortress from there to Windfall, and then to Outset. Interestingly enough, no matter how long it takes to end the game, the ship always appears in the middle of the voyage back to Outset, with Aryll on board, at the end of the game.