From Zelda Dungeon Wiki
Jump to navigation Jump to search
Want an adless experience? Log in or Create an account.
Kane 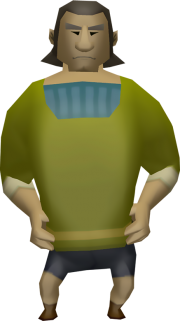 Kane is one of the many sailors on Windfall Island in The Wind Waker.

His old dream used to be becoming an artist, but he ended up becoming a sailor instead. He he is still somewhat of an art critic. When Link places a decoration on top of the Windfall Island gate, Kane will critique it depending on what decoration is placed. If Link places a Postman Statue or a Shop Guru Statue on top of all pedestals on the gate, Kane will reward him with 50 Rupees.

At nighttime Kane can be found at the Cafe Bar, sitting down and having a drink with Dampa. He wonders what a kid like Link is doing at a place like this at such a late hour.[5] During the Endless Night, when Tetra's Pirates come on shore at Windfall Island, Kane has heard the rumors, but doesn't actually believe them.[6]

While there is no direct connection, two sailors can be found right on the dock at Windfall Island, named Candy and Kane.