From Zelda Dungeon Wiki
Jump to navigation Jump to search
Want an adless experience? Log in or Create an account.
Baito 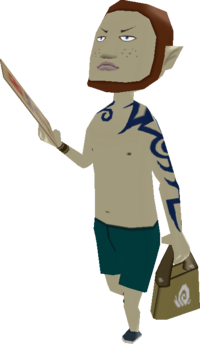 Baito is a character who from The Wind Waker.

Baito is a Hylian that arrives on Dragon Roost Island in search of a job. He wants to get a job at the Mail Center and Link can help him get the job as part of the Part-Time Job sidequest.

If Link never interacts with Koboli, found at the Mail Center, Baito will eventually appear at Dragon Roost Island, on the outside, near the King of Red Lions. Baito appears after Link has cleared the Dragon Roost Cavern and calmed down Valoo. Although Baito does seem a bit lost, as he has an interview, but has no idea how to climb up and make it to the Rito Aerie.[1][2]

However, if Link speaks with Koboli and begins the Part-Time Job quest earlier, Baito can arrive at Dragon Roost much earlier and will work as an intern for Koboli.

After successfully sorting 10, 20, and then 25 letters for Koboli at the Mailing Center, Link can leave the Rito Aerie and re-enter to find that Baito has arrived as a Part-Time Worker. After being hired as a part-timer, Link is able to speak with Baito to continue helping with Mail Sorting. Baito wants to see Link's legendary 25-letter sorting ability.[3] After successfully doing so, Baito will give Link a Note to Mom, a letter which he asks Link to drop off in the mailbox.[4][5] Link will later receive a letter from Baito's mother, Kashiko, and she will thank him for helping her son, enclosing a Piece of Heart with the letter.