From Zelda Dungeon Wiki
Jump to navigation Jump to search
Want an adless experience? Log in or Create an account.
Niko 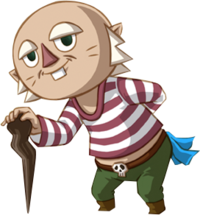 Niko is a recurring character in The Legend of Zelda series, having appeared in all three of the Toon Link games.

Niko is the lowest member of Tetra's Pirates until Link comes along. This causues Niko to feel high and mighty and wants to see Link fail.[1]

Niko teaches Link how to swing from rope to rope across the Cargo Hold of the Pirate Ship. It is part of the test that all brand new pirates must take.[2][3][4][5][6][7][8] Niko gets Link to do this by promising him a prize, although he jokes with him that it will probably take him a full year to accomplish this task.[9] Link surprises Niko when he accomplishes the task.[10][11] Niko then has to give Link a treasure, which ends up being the Spoils Bag.[12][13]

During the Endless Night, when Tetra's Pirates arrive at Windfall Island to steal some Bombs from the Bomb Shop, Niko is left behind to guard the ship. The entrance to the cabin of the ship is locked and a password must be said in order for Niko to unlock the door. There are six different password, and they are random for each game file.[14][15][16][17][18][19] The passwords include Treasure, Schooner, Plankton, Chummily, Swabbies, and Barnacle.

Niko is suprised to see Link, as he thought he got gobbled up by the Helmaroc King back at the Forsaken Fortress.[20] Once Link left, Niko was moved back to the bottom rung of the ladder, so he has to stay behind while everybody else is having a good time at the Cafe Bar.[21]

Niko has setup another game for Link to play, with this one being marginally harder. Link will need to swing from the hanging lantern ropes, making it to the other side within the time limit.[22] If Link makes it to the other side, Niko will allow him to open the chest, which contains the Bombs.[23]

Niko is Link's roommate in Spirit Tracks. They live together in a house along the beaches of Aboda Village. Similarly to Phantom Hourglass, he will tell Link the intro to the game, which is a summary of the Spirits of Good's fight against Malladus, the Demon King. This is the same Niko from the previous two games, being evidenced by him saying that Link in his Recruit Uniform looks just like an old friend of his when he was young,[24] and by when he gives Link the Shield of Antiquity, he says it belonged to an old friend of his from his adventuring days,[25] and considering that this shield is the same one Link has in Phantom Hourglass, it is a solid connection to the previous game.

While Link is waiting for Alfonzo to hook up the Cannon to his train, Alfonzo says he should go visit Niko.[26] When he does, Niko says Link looks just like an old friend of his, which reminds him of the golden days.[27] Something from what he previously stated reminded him of something, as he will jump up and ask Link to do him a favor.[28] He will then proceed to explain to Link that he used to visit so many exotic places and always found a Stamp Station near these places. However, he never had anything to put the stamps in. He then continues to ask Link to use his Stamp Book to collect all the stamps. He himself missed and bring them to him.[29] He also hints at a prize for bringing the stamps to him.[30] With that, Link is off, looking for all of the Stamps.

There are three main rewards that Link can receive from Niko for collecting the Stamps. The first is the Shield of Antiquity, which Link can get by collecting ten Stamps and bringing them back to Niko. The Shield of Antiquity is the best Shield of the game, and thus is very valuable. If Link had already bought a shield, Niko will apologize and say he can switch back whenever he wants.[31] The second prize is the Engineer's Clothes, and they can be won by collecting 15 Stamps. At this time, Niko will offer Link the choice of either staying in his Recruit's Uniform or wearing the Engineer's Clothes, hinting that he prefers the Engineer's Clothes himself.[32] The third and final reward is the Swordsman's Scroll#2. This allows Link to perform a Great Spin Attack. This technique is very useful, and even Niko recognizes it.[33]