From Zelda Dungeon Wiki
Jump to navigation Jump to search
Want an adless experience? Log in or Create an account.
Cubus Sisters 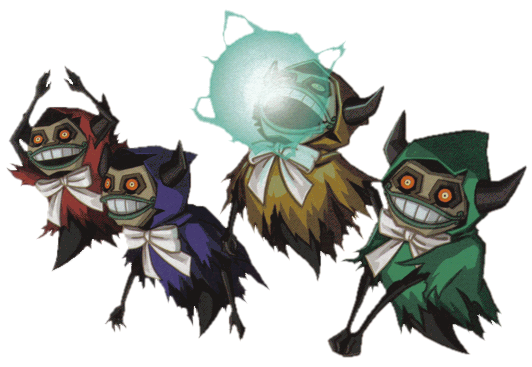 The Diabolical Cubus Sisters, or more simply known as the Cubus Sisters, are, collectively, the boss of the Ghost Ship, the fourth Dungeon in Phantom Hourglass. They belong to the Great House of Cubus and claim to have heard of Link prior to his arrival. They deceive Link into believing they were locked away on the Ghost Ship, causing him to scour the base of the ship in search of all four sisters.[1] Upon reuniting all four, they reveal their hideous demonic forms and begin to attack Link. The Cubus Sisters, after being "saved" by Link, insist that he must play Dead Man's Volley with them, to which Link has no choice but to accept, being transported aboard the ship.

After reuniting the four Cubus daughters, the four Sisters reveal their true forms and turn into four hideous flying ghosts. Once the battle begins three of the four sisters who are flying in the air above will shoot out large lasers out at Link. The fourth sister will toss a large energy ball at Link. Simply walk around the ship, dodging the lasers and try to stand underneath the fourth sister. Once she drops an energy ball, strike at it with your sword and it will send the energy right back at her. If you miss the energy ball, it will hit the ship and split into many smaller balls that cannot be reflected. It takes two energy balls to defeat each of the four sisters. Each time you hit a sister, they will group together and then spread apart once again. The sister that is deflecting the ball will change.

After one of the sisters has been defeated and only three remain the battle changes slightly. This is probably the toughest part of the battle as everything seems to just move a lot faster. Only two of the three will now shoot lasers at your while the third delivers the energy ball. Reflect it back at the sister just as before, but this time she will reflect it back and forth among her sisters and eventually it will come back at Link much faster. Reflect it a second time and it will hit one of the sisters. Repeat this until the second sister has been defeated. Also, once you have defeated the first sister and only three remain, they will periodically throw smaller balls out at you that cannot be reflected. If Link strikes at them it splits into smaller balls and it can harm Link. It is best to just move out of the way.

The battle continues on with two sisters and is actually easier since you know they can only hit it back and forth to each other. Repeat the same process as before, volleying the energy ball back at the sisters. Eventually you'll be down to just one of the Cubus sisters. She fly's much closer to Link and will shoot multiple energy balls at the same time. Two of them consist of the smaller balls that cannot be deflected while the other one is the one you need to deflect. Stand right under her and once you see which one is the large one that you can deflect, run towards it and deflect it. You can use the spin attack to assure that you deflect it back at the last remaining sister. Usually the last sister reflects the energy ball back several times, so just keep volleying with her until it hits her. Repeat this process until you hit the final sister three times to finish the fight.

The name "Cubus" may derive from the breed of demon known as Incubus and Succubus. The Succubus is a female demon that seduces men to steal their life force, suiting the sisters' deceptive nature. The Succubus, however, lack the horns of the Incubus that appear on the Cubus Sisters.