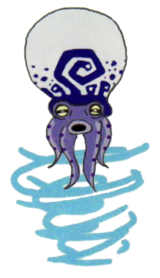 Cyclok, Stirrer of Winds, is the boss of the second dungeon in Phantom Hourglass, the Temple of Wind. As Link ascends the Temple of Wind into the final chamber the door slams shut behind him and he is greeted by Cyclok, a blue and white Octorok who quickly demonstrates his control over the wind by summoning a small tornado around himself.

The cyclones that Cyclok provides us with are exactly what we need to defeat him. There are three spots where cyclones are located on the bottom screen but only one of them is available at a time. When Cyclok's shadow moves over the cyclone. Toss a bomb into the cyclone and it will be sent up into the air, blasting away at Cyclok and sending him tumbling to the ground. At that point run up to him and strike him repeatedly with your sword. He will eventually regain consciousness and fly up to the air once again.

Cyclok will also summon smaller cyclones that will move around on the surface. These ones can pull Link into the air but they can also pull bombs into the air. Use these as well when trying to nail Cyclok with a bomb.

Periodically, Cyclok will drop to the surface and quickly dash towards Link. You cannot harm Cyclok when he does do this, so just dodge his attack. Once he is back in the air, continue tossing bombs into the cyclones trying to hit Cyclok.

If you do run low on health or bombs, there are jars all around the area that contain extra hearts and some bombs. There are also bomb flowers that can be used, but they are a bit more difficult since they are timed from once you lift them up, so it is best to just stick with regular bombs. If you hit Cyclok continuously every time he falls to the ground, it should take about five bomb shots to defeat him.