From Zelda Dungeon Wiki
Jump to navigation Jump to search
Want an adless experience? Log in or Create an account.
Eox 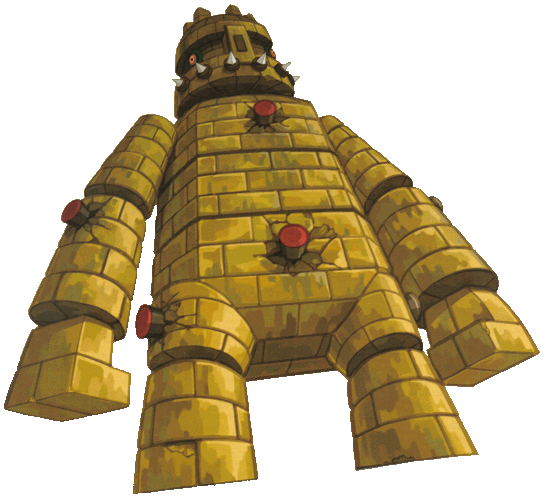 Eox, Ancient Stone Soldier is the boss of Mutoh's Temple, the final dungeon in Phantom Hourglass.

Once Link enters the boss chamber, he sees this massive stone creature. This ancient warrior usually starts Link off with its rather slow fist smash attack. It simply winds up and strikes the floor near Link. He does move quite slowly so you can simply run away from the area he is striking. Be careful though because if he doesn't hit you but is close enough, it will still cause damage. The other attack that this stone warrior has is the turrets that are around its neck. These will shoot out Arrows at Link, which are quite easily avoided by simply moving around. Your shield will also deflect these weak arrows that are shot your way.

When it isn't attacking, run to one of the four catapults that surround the boss chamber. Step on the footsteps and smash the pillar to launch Link into the air. You will notice that Eox has many red bolts all over his body. With the hammer equipped, strike at the red bolts repeatedly while you are in the air. After several hits to a single spot, part of his stone armor begins to crumble. Repeat this method of attack for all ten of its red bolts. It takes three swings with the hammer to break off each piece of Eox's armor.

After ten bolts are gone, the former massive yellow enemy has fully changed to fragile gray and has become much more vulnerable. Four new red buttons appear on Eox's face. Just as before, catapult your way up to his body and use the hammer to strike at each of the buttons. This time however, you only need strike each button once, but you must strike all four buttons in one catapult. Once you strike the button it will change to the color blue. If you don't get them all, the buttons will reset to red. Hitting all four buttons will make Eox collapse to the floor.

He still has some fight in him and the turrets in his head will continue to shoot arrows out at Link but this time more furiously. The view of the room has shifted as well. No longer is Eox standing up and taking up both screens. Since he is just moving on the ground, the top screen has once again become the map. When Eox is close by, use the catapult once again, but this time we want to land on top of Eox's head. Now use Link's sword to slash away at the blue crystal on top of his head. You lose a half of a heart if Eox throws you off of his head so strike him quickly. Repeat this process until Eox is down for good.

Upon Eox's defeat, Link will obtain a Heart Container and gain access to King Mutoh's tomb, where he will receive the Aquanine.