From Zelda Dungeon Wiki
Jump to navigation Jump to search
Want an adless experience? Log in or Create an account.
Blaaz 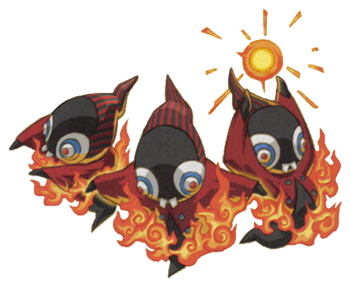 Blaaz as it appears in Phantom Hourglass

Blaaz, Master of Fire is the Boss of the first Dungeon in Phantom Hourglass, the Temple of Fire. He was created by Bellum with the sands of time to seal away Leaf, the Spirit of Power. Blaaz bears similarities to a Wizzrobe, though instead of a hood, Blaaz appears to have a hat, helmet or head of what appears to be glowing embers. This appearance is also reflected in his triplet form. 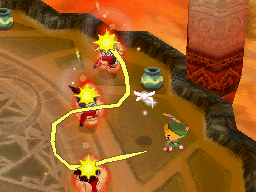 Once the battle begins, Blaaz will split into three smaller forms. The three triplets will chase Link around the room shooting out fireballs towards him. Don't bother trying to strike at the separate mini Blaaz bodies with your sword because it won't affect him. The mini Blaaz incarnations will gather fire and shoot fireballs out at Link. The fireballs are quite slow and are very easy to avoid. If at any point during the battle you are low on health, just slash at the pots within the chamber to fill up your hearts.

In order to successfully defeat Blaaz, you must fuse him together using the Boomerang. While on the run, bust out the boomerang and trace a line between the three forms of blaze to fuse them all together. However, there is a catch to this as well. If you take a look at the top screen map you will see the three forms of Blaaz wandering around. One of them has one horn, another has two horns, and the other has three horns. When tracing the boomerang you must target them in a specific order. Logically, the order is the one with one horn, then two horns, and of course, three horns.

Once successfully fused together, just run up to Blaaz and keep tapping at him to strike him over and over with your sword. After several hits, Blaaz will disappear for a second and move around the room before re-appearing. Keep chasing Blaaz around while striking him with your sword. As Blaaz begins to weaken, fire rocks will begin to fall from the ceiling.

Just keep repeating the process of fusing Blaaz together with the boomerang and strike him with your sword. If you are quick with your striking, it should take no more than three fusions of Blaaz to defeat him.