From Zelda Dungeon Wiki
Jump to navigation Jump to search
Want an adless experience? Log in or Create an account.
McNey 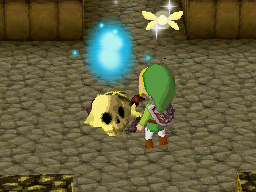 McNey is a deceased character in Phantom Hourglass. He was once an explorer, who was searching for the Pure Metal called Aquanine, which once belonged to the Cobble Kingdom. He set out to find the Isle of the Dead, which held the Pure Metal he so desired. During his expedition, he recorded most of his research, adventures, and findings in the Explorer's Compass. Upon making his way to the Phantom Corridor, he entered it, and tried to make his way through before solving its riddle. As such, he got lost, and soon died. His spirit remained, and when Link first enters the Phantom Corridor, McNey warns him of the dangers of the corridor, and of what happened to him.