From Zelda Dungeon Wiki
Jump to navigation Jump to search
Want an adless experience? Log in or Create an account.
Mila's Father 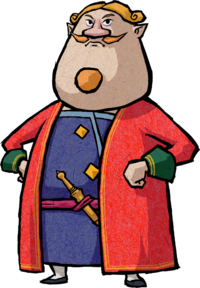 Artwork of Mila's Father when rich

Mila's Father is character from The Wind Waker who resides on Windfall Island. He has one daughter, Mila.

When Link first meets him, Mila's father is a rich man who lives in the Auction House on Windfall. If Link visits the lower floor and breaks the expensive pots down there, he scolds him.[1] If Link does so again, Mila's father forces him to pay 10 Rupees per vase.[2][3] While he lives upstairs, at nighttimes he rents out the first floor of his house for the auction house, run by Zunari. During the Endless Night, he comments that because of the storm, it looks like there won't be an auction this evening.[4]

However, if Link speaks to him on the upper floor of his home, Mila's father is revealed to be pacing around. Mila was taken away to the prison in Forsaken Fortress, and he cares for her very much and is quite worried.[5] He has asked many people to rescue her, but none have succeeded.[6] At last, he asks Link to do the job for him.[7] He promises to pay him, claiming that he would spend his entire fortune to save her.[8]

After Link rescues the girls from the fortress, Tetra and her pirate crew take Mila and ransom her to her father. He loses all of his money paying them for her release.[9] When Link next speaks with him, he is dressed in rags and complains about Link's failure without realizing that it actually was Link who saved her.[10]

He praises his daughter for her efforts to help their new situation, describing how she took a job at Zunari's Shop.[11] He also expresses his concern over how she often sneaks out at night.[12] Worried that she is doing something bad, he asks Link to find and stop her at night if he catches her in the act.[13]

After losing his fortune, Mila's father becomes a changed man, admitting that there are some things in the world better than money.[14] He says that he is happy at last.[15]