From Zelda Dungeon Wiki
Jump to navigation Jump to search
Want an adless experience? Log in or Create an account.
Makar 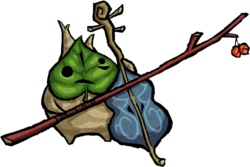 Makar is a Korok from The Wind Waker. Like all Koroks, he is able to fly using a Deku Leaf. He also plays the violin, a skill he shares with the ancient Wind Sage, Fado.

When Link arrives at the Forest Haven in search of Farore's Pearl, the Great Deku Tree says that he will give Link the pearl after the ceremony. However, Makar's friend Linder appears and informs them that Makar flew too close to the Forbidden Woods and fell in. Because Makar is needed to attend the ceremony and play his violin, Link then follows Makar into the woods. He is eaten by Kalle Demos, but Link defeats the creature and rescues Makar. They then return so Makar can play at the ceremony. The other Korok fly off to plant the new seeds of trees across the world, but Makar stays behind, along with Hollo.

Makar is also later revealed to be the Sage of Winds. During Link's quest to empower the Master Sword, the previous sage, Fado, tells Link that his successor and descendant will be the one who plays the same violin. Link recognizes the instrument as the same one Makar played at the ceremony. After locating Makar behind the waterfall where he was practicing music, Link conducts the Wind God's Aria to awaken him as the new sage. The newly awakened Makar subsequently helps Link complete the Wind Temple. Link can take control of Makar using the Command Melody. He is able to plant seeds in soft patches of dirt to make trees grow, which can solve puzzles or reveal treasure chests. The trees can also be used as Hookshot targets. Sometime after entering the temple, Makar is captured by Floormasters and Link must find the Hookshot and use it with the Iron Boots to rescue him.

After Link defeats Molgera, Makar plays the Wind God's Aria with Fado while Link conducts with the Wind Waker to fully empower the Master Sword.

Makar is last seen on Tetra's Pirate Ship at the end of the game, standing beside Medli.