From Zelda Dungeon Wiki
Jump to navigation Jump to search
Want an adless experience? Log in or Create an account.
Quill 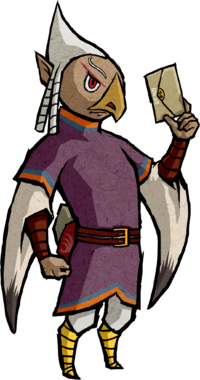 Quill is a vigilant and dutiful Rito in The Wind Waker. He has the work of delivering letters throughout the Great Sea.

Quill is first seen delivering letters in Outset Island. However, while doing so, he becomes shocked after seeing the Helmaroc King holding a girl, Tetra, and dropping her into the Forest of Fairies.

When Link, Tetra and Gonzo are in a conversation after Aryll was taken by the Helmaroc King, Quill jumps in and says if the pirates had not come to Outset Island, Aryll would not have been snatched away, and says that girls have been kidnapped from all regions of the Great Sea to the Forsaken Fortress, because of their pointy ears.[1]

When Link arrives at Dragon Roost Island, Quill is a bit surprised to see him, stating that Link has traveled quite a distance for somebody with no wings.[2] After hearing that Aryll is still being held captive at the Forsaken Fortress, Quill tells Link not too worry, as he's sure she'll hang in there.[3]

When Quill traveled back to Dragon Roost Island, he tells his people about Link's sister having been taken. Quill encourages Link to meet with the Rito Chieftain.[4] Quill will then fly on ahead, telling Link to follow behind. When Link heads inside, he sees Quill and the Rito Chieftain discussing the situation with Valoo. Quill suggests to the Chieftan that maybe Link can help out with the Chieftan's son, Prince Komali.[5] After the discussion, Quill gives Link the Delivery Bag and suggests seeking out Medli in one of the upper rooms.[6][7]

After Link helps Medli enter Dragon Roost Cavern, Quill will appear back in the main part of Dragon Roost. He mentions that he got word that someone grabbed a girl who looked like Medli and tossed her. Quill has no idea that Link actually helped Medli, and instead, Quill tells Link to just stay back and look after Komali.[8]

Link can later find Quill on Greatfish Isle, the island that has been tormented, and he informs Link that Jabun was located here, and that he had the time to flee before settling at Outset Island.[9] Quill mentions that he informed Tetra's Pirates of Jabun's presence at Outset Island. It caused them to set sail in that direction, but they were unable to break the stone slab that Jabun is hiding behind. Quill then mentions that the Pirates have since travled to Windfall Island, and he encourages Link to head in that direction.[10]