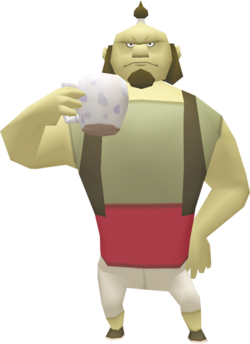 Figurine of Candy from the Nintendo Gallery

Candy is a character in The Wind Waker.

He is a sailor who stands near the dock on Windfall Island. Though he appears older, he's actually only seventeen years old..

When Link first arrives at the island, he is looking for a Sail and can speak with Candy. Candy ridicules Link, questioning why he would ever give his sail away to Link when it is necessary for him to survive when at sea.[1]

After Link acquires the sail, Candy remains on the shore and when spoken too, he will comment on the direction of the wind, informing Link of what is in each of the directions.[2] The islands in the eight directions of the wind are as follows, along with Candy's commentary about the locations.

In the evening, Candy can be found at the Cafe Bar, enjoying a late night drink. Link can talk to him and he'll ramble on about Big Octo's. He talks about giant whirlwinds that form and out comes a massive squid with beady, gnarly, glowing eyes.[12][13] Candy seems to give Link indirect advice, but suggesting that the way to defeat a Big Octo is to hit him right in the eyes.[14] If Link tells Candy that he's been eaten up by a Big Octo, he won't believe him, as most sailors would be toast if that happen. Not Candy though, as he is as rough and tumble as they come.[15]

During the Endless Night, when Tetra's Pirates come ashore at Windfall Island, Candy will wonder what the pirates would want from such a peaceful island such as Windfall.[16]

While there is no direct connection, two sailors can be found right on the dock at Windfall Island, named Candy and Kane.