From Zelda Dungeon Wiki
Jump to navigation Jump to search
Want an adless experience? Log in or Create an account.
Namali 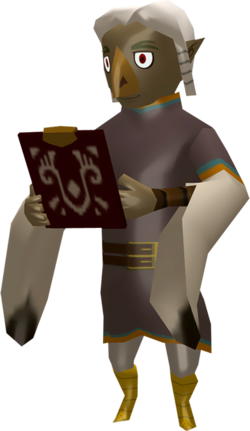 Namali is a Rito that lives on Dragon Roost Island in The Wind Waker.

When Link first arrives on the island, Namali can be seen walking around, carrying a clipboard. He starts on the lower level and walks up the ramp, crossing paths with Pashli, a similar looking Rito who is also carrying a clipboard. Namali will warn Link that Dragon Roost is a dangerous place the all of the Bomb Flowers that are growing everywhere. Although now it's even more dangerous now that the bomb flowers have all dried up. He blames Valoo for the mess that Dragon Roost is currently in.[1]

He mentions that the only concern use to be Bomb Flowers when Rito would travel to Valoo to get their Scales. However, now it's even more dangerous as they cannot even get close to the mountain. The bomb flowers that are found near the entrance to Dragon Roost Cavern have all wilted because the earth is so dry. They are not producing Bomb-Fruit at all.[2]

After Link has defeated Gohma, Namali can still be seen walking his same pathway. However, he doesn't seem to be aware about what has happened with Valoo, as he is wondering if he's feeling better.[3] Although he comments that this is great for the younger Rito, as they can now climb Dragon Roost and get their Scales.[4]