From Zelda Dungeon Wiki
Jump to navigation Jump to search
Want an adless experience? Log in or Create an account.
Hollo 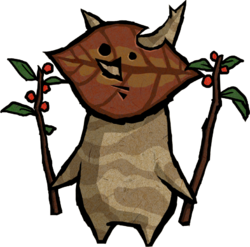 Hollo is one of the Korok in Forest Haven in The Wind Waker.

Hollow runs Hollo's Forest Potion Shop in Forest Haven. He is the only Korok who doesn't leave the Forest Haven after Link completes the Forbidden Woods and the Korok commence with the Korok Ceremony. All of the other Korok fly off to islands on the Great Sea to plant a new forest.

When Link firest meets Hollo, the Korok hopes to help Link, but mentions that the potions that he creates only work on his fellow Korok.[1] If Link speaks with Hollo before getting the Deku Leaf and gaining a Magic Meter, he hints that if Link does gain the ability to use Magic, he can create a potion that will be able to restore it.[2] However, Hollo needs the proper ingredients to do so, citing that they aren't found within the Forest Haven.[3]

Hollo mentions that he needs seeds from the monsters within the Forbidden Woods to make his potion.[4] Hollo is referring to Boko Baba, which can also be found just outside of the Forest Haven. In particular, Hollo needs four Boko Baba Seeds to create a Blue Potion, which will restore both Link's Health and Magic.[5][6][7]

Hollo wears a reddish brown leaf sideways and carries two branches with berries on them.

In Breath of the Wild, numerous Koroks share a very similar design of that of Hollo. Maca, one of the Koroks found in the Korok Forest, wears a leaf that is almost identical to Hollo's, although the two Koroks have a different body type.