From Zelda Dungeon Wiki
Jump to navigation Jump to search
Want an adless experience? Log in or Create an account.
Boko Baba 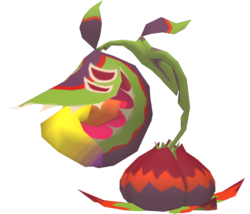 Boko Babas are enemies from The Wind Waker.

Boko Babas are carnivorous plant enemies that live in the Forest Haven and the Forbidden Woods on the Great Sea. They are similar in appearance and name to Deku Babas, and may very well be an evolved species adapted to the new terrain of the Great Sea.

Boko Babas first appear as harmless Baba Buds, resembling them in all but coloration, but when they sense a victim getting close, they spring out, revealing their monstrous heads (Boko Babas can be distinguished from Baba Buds by their coloration; Boko Babas are red and dark purple, whereas Baba Buds are lighter shades of purple). They have mouths similar to that of a Venus fly trap, with purple-tipped yellow tongues dripping purple saliva, as well as four eyes.

They can't move out farther than their stems reach, so they are best killed from a distance. Their Gulp attack varies in damage from 1/4 heart to 2 1/4 hearts, although 1 1/4 heart damage happens most often. It can sometimes leave behind a Boko Stick, but most often it leaves behind a Boko Baba Seed as a reward.