From Zelda Dungeon Wiki
Jump to navigation Jump to search
Want an adless experience? Log in or Create an account.
Cliff Plateau Isles 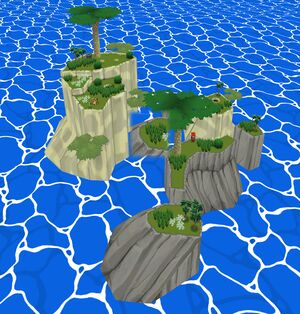 Cliff Plateau Isles is a set of islands near the southeast corner of the Great Sea in The Wind Waker. In Link's Sea Chart to the west is the Forest Haven, to the south is Five-Star Isles, and to the north is Bird's Peak Rock. A Korok named Aldo can be found here.

At the end of the small islands that make up Cliff Plateau Isles is a hole. Upon falling into it Link will discover a hidden area under the isles. Here there are four Boko Baba and a walls covered in vines. The last Boko Baba produces a jump flower, which propels Link into the air, allowing him to reach the upper level of the area. Using Fire Arrows, Link is able to destroy the wooden planks, allowing him to fly over to the edge using his Deku Leaf. Once Link steps into the beam of light, he is transported to the larger section of the Cliff Plateau Isles. Here he finds a Treasure Chest containing Treasure Chart 25.

There is a Blue ChuChu through the cave on the smaller island to emerge on top of the larger island.