From Zelda Dungeon Wiki
Jump to navigation Jump to search
Want an adless experience? Log in or Create an account.
Shark Island 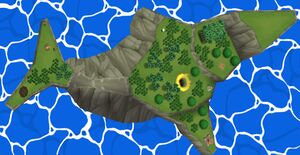 Shark Island is one of the many islands scattered throughout the Great Sea in The Wind Waker. The island itself is shaped like a shark, thus its namesake, and is located three squares west from Forest Haven. On the island lives the Korok, Irch, where he has chosen to plant his new forest from the seeds of the Great Deku Tree. Cyclos is also found around this island, and if Link shoots him while being trapped by his cyclone, he will teach him the Ballad of Gales.[1] This island is also one of the islands that houses the rare Blue ChuChu, however it is on a high, hard to reach spot on the island.

On this island is a secret cave that is surrounded by fire. Scattered around the island are four switches that are used to open the entrance to the cave by putting out the fire blocking it. However, Link cannot hit all of the switches as soon as he finds the island. Two of the switches require certain items to press them down: the Iron Boots and the Skull Hammer. Once Link is inside the cave, Bokoblins, Miniblins, Moblins, Darknuts, and Wizzrobes wait for whomever enters the cave. If Link defeats them all, a treasure chest appears containing 200 Rupees.

After activating all four of the switches on this island quickly, an updraft appears in the sea around Link. If the young hero heads to the "tail" of the island, where the Iron Boots switch is, he can play the Wind's Requiem and change the wind to blow south-east. Link can then glide to the updraft in the distance but he must fight the wind to reach his destination. Link must now float in the air and try to get into the updraft. After catching it, Link can traverse to the highest point of the island. The wind helps Link effectively glide there now. Once Link lands safely on the top of the island, he can fight the Blue ChuChu who is waiting there.