From Zelda Dungeon Wiki
Jump to navigation Jump to search
Want an adless experience? Log in or Create an account.
Darknut 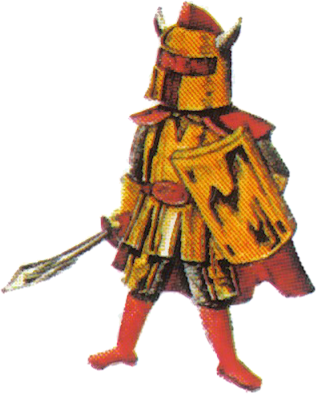 Darknuts are recurring enemies in The Legend of Zelda series. They are humanoid figures, who use a sword and shield to attack and defend, respectively, just like Link. Most battles against them are of the classic sword-and-shield variety.

Darknuts appear in The Legend of Zelda in two variations: red and blue. Blue Darknuts take more hits to defeat than red ones. These enemies often appear in groups of three or more, making them tough to defeat in constricted areas. They are commonly found in dungeons.[1][2][3] One of the easiest ways to defeat them is with the usage of bombs.

In Link's Awakening, Darknuts only appear near and inside of Kanalet Castle, and were the ones who chased off Richard. Darknuts here behave very similarly to sword-wielding Soldiers from A Link to the Past, charging at Link while defending their front with the large shield they carry.

In Ocarina of Time, Darknuts do not appear, but enemies similar to Darknuts can be found in the Spirit Temple and Ganon's Castle, called Iron Knuckles.

In Oracle of Seasons and Oracle of Ages, like in The Legend of Zelda, Darknuts come in either red or blue, the blue ones being the stronger of the two. Alongside the red and blue varieties is a golden Darknut, which appears only in Oracle of Seasons on the Western Coast during spring. Besides the typical sword-wielding Darknut, there are also Darknuts who throw spears instead, although these Darknuts cannot defend themselves from the front.

Four Swords Darknuts look like yellow-armored knights wielding large spiked balls. They will swing it around while moving towards Link (or Links), and if they are close enough for a certain time, they will launch the ball in a straight line — a very long-ranged attack — and then bring it back close to themselves and stop moving. This is Link's only chance to attack, since the fast moving ball makes it impossible to approach at any other time. They can take a number of hits, and without both Sword Shards can be hard to defeat. They are found whithin areas that close all exits until Link defeats the enemies that appear — like mini-boss battles of sorts — and a lightning bolt strikes the ground to make them appear. They are very seldom — if ever — fought alone, making them (and the enemies Link fights at the same time) very hard to defeat.

In The Wind Waker, Darknuts come in several varieties, which are color-coded according to their strength. Some of the stronger Darknuts have capes. The first Darknut is fought in as a mini-boss in Tower of the Gods. All Darknuts have somewhat impregnable armor that can be removed either through repeated damage or through cutting the straps holding the armor in place, as well as by parrying, which lets Link remove either their helmet, or their armor. The unarmored Darknuts can finally be damaged, but they are also much quicker and more nimble, allowing them to evade Link's blows, as well perform new moves. Link can also disarm the foes and pick up their powerful sword, which has a long range, and can break pillars. While disarmed, Darknuts fight with various punches and kicks, although they try to recover their weapon as quickly as possible.

Darknuts are some of the toughest enemies Link faces in The Minish Cap. Like in The Wind Waker, they come in a variety of colors. The black versions have the most health and use a 'tornado thrust' attack in which they stab forwards whilst unleashing a powerful rotary energy in their sword. Their sprites are 2D representations of the Darknuts from The Wind Waker and share the same weak point. However, unlike in The Wind Waker, Darknut armor in The Minish Cap cannot be removed or destroyed.

Link first faces off against a Darknut in the mini-boss battle in the Temple of Time. From there, Link will encounter Darknuts as regular enemies from time to time. When battling one, look for openings in its defense and attack it with the sword. It uses its massive sword to attack, but this can be blocked with the shield. The back slice works well against the Darknut but even that will be blocked quite often. The best bet is to hold out a shield and keep side jumping, at which point he can be hit with the sword. The shield attack and helm splitter if the attacks pop-up. Each time a Darknut is hit a piece of armor will break off. After several hits, all his armor will be removed and he'll toss away his massive sword and pull out a more traditional blade.

In the second phase of the battle Link can simply wait for him to attack, dodge its strikes, and then slash at him repeatedly with the sword. Alternatively, using the back slice attack will cause the Darknut to block. Once it blocks the attack, it will be vulnerable for a few seconds at which point Link can slash at him with his sword.

When facing multiple Darknuts at once, it is recommended to tackle them one at a time. (See the Mini-Boss Guide on Darknuts for more details). Darknuts also appear in the Hyrule Castle and Cave of Ordeals.

Darknuts are tough enemies that patrol Militron and Fortress Centrum. They wield large swords and shields. They have a full body of armor and can be quite difficult to defeat. It takes numerous sword slashes to penetrate the thick armor of the Darknut. Link must keep his distance, and shoot beam attacks towards the Darknut. Alternatively, Link can use a bomb to defeat the Darknut. Even though they are rare and sturdy enemies, they will only leave a single red ruby as a spoil.

Darknuts can be found patrolling the Dodamai Palace and Reesong Palace. They look like and act the same as they did in The Faces of Evil.