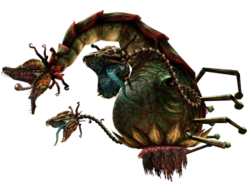 Twilit Parasite: Diababa is the Boss of the first Dungeon in Twilight Princess, the Forest Temple.

Diababa appears as a giant three-headed variation of a Deku Baba. It has been corrupted by the Fused Shadows. Its appearance pre-Fused Shadows is unknown, however it is most likely to be just a regular Deku Baba that was it touched the Fused Shadow become Diababa.

The fight against Diababa has 2 stages.

The first stage of the battle is fairly simply; to defeat Diababa Link must use the Gale Boomerang on one of the Bomblings that are sitting on wooden platforms that are floating on the Purple mist in the area. Sending the Bombling into one of the giant Deku Babas will kill it, so after both have defeated they will sink into the liquid to complete stage 1.

The second stage of the battle involves Diababa's full body, who will appear in a cutscene after Link completed the first stage. Diababa will attack with a number of variates; see the infobox see details. All Link can do is avoid the attacks. After a while, Ook the Baboon will appear in another cutscene and will swing around on a rope above Diababa's head with a Bombling. Target the Bombling and Diababa's face with the boomerang to stun Diababa. Diababa will fall, and reveal its weakness; an eye that is on the end of its tongue. Hit it with a Jump Attack and then a Spin Attack. If Link has acquired the Ending Blow, use it when prompted on Diababa's Eye tongue to finish the battle. Diababa will die and will leave behind the first Fused Shadow and a Heart Container.