From Zelda Dungeon Wiki
Jump to navigation Jump to search
Want an adless experience? Log in or Create an account.
Ook 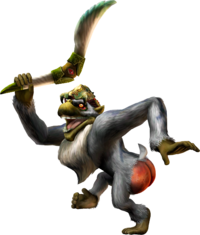 Ook is the Mini-Boss of the Forest Temple, and thus the first boss,[1] in Twilight Princess. He is a white baboon that is initially presented as the crazy monkey leader,[1] as he is described by one of his fellow Monkeys as having gone "funny in the head".[2] He is equipped with the Gale Boomerang, and during his first appearance in the game, he uses it to cut down a bridge leading to the other side of the temple. In order to get to the other side, Link must free four Monkeys from their prisons and use them to swing across the void left by the bridge.

Once Link has successfully reached Ook's lair of sorts, he can fight him. Ook uses the Gale Boomerang in a number of ways, including to free Baba Serpents that were originally hanging from the ceiling, and to directly attack Link.[3] These attacks deal ¼ and ½ heart damage, respectively.

In order to attack Ook, Link can roll into the pillars in which Ook attacks from; this causes Ook to lose balance and be vulnerable to either another roll or a hit from his own boomerang. Either one knocks Ook off the pillar, allowing Link the chance to attack him. By utilizing spin and jump attacks, Link can defeat Ook fairly quickly.

Once Ook has been defeated, a parasitic insect unlatches itself from Ook, and is seen dying and then subsequently vanishing. After this, Ook regains consciousness, and appears to be much more cowardly than before, as at the mere sight of Link, he leaps out of the room. With this, the Gale Boomerang becomes Link's to collect.

During Link's battle with Diababa, Ook appears and helps Link in the battle by providing him with Bomblings after Diababa has destroyed the ones in the area.[4] Ook is influential in this battle,[5] as without him, Link really has no chance against Diababa. After this battle, Ook is never seen again.