From Zelda Dungeon Wiki
Jump to navigation Jump to search
Want an adless experience? Log in or Create an account.
Mayor Bo 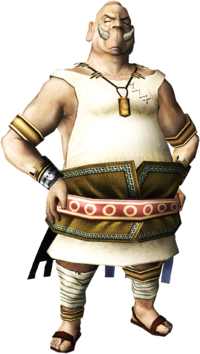 Mayor Bo is a character in Twilight Princess. He is the mayor of Ordon Village, where Link resides in the beginning of the game. Bo is also the father of Ilia, and is a good friend of Link's. Bo isn't an important character until Link needs to ascend Death Mountain, because Bo is the only one who has defeated the Gorons. Bo teaches Link how to Sumo wrestle, for that is how the Gorons determine how strong someone is. It is later revealed that Bo could only beat the Gorons at wrestling with the help of the Iron Boots, and after realizing that he needed to do something to help, he gave them to Link. He made Link promise not to tell anybody about the boots, "especially Renado", who is a close friend of his.