From Zelda Dungeon Wiki
Jump to navigation Jump to search
Want an adless experience? Log in or Create an account.
Rusl and Uli's Daughter 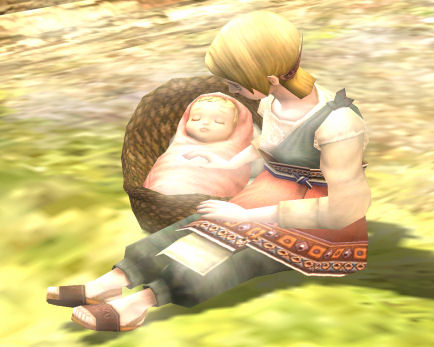 Rusl and Uli's Daughter is an unnamed character from Twilight Princess. Throughout the entirety of the game, Uli can be found in Ordon Village, where she is visibly pregnant with a child. During one of the first quests in the game, Uli will appear near the stream by her house, having lost her cradle. It is the same cradle that Uli used when her son Colin was a child, and she plans to use it for her daughter.[1] After retrieving it for her, she will give Link the Fishing Rod that Colin made for him.

She only makes one appearance in the game where she can be seen during the end game credits, sleeping in the Baby Cradle, wrapped in a pink blanket.