From Zelda Dungeon Wiki
Jump to navigation Jump to search
Want an adless experience? Log in or Create an account.
Lord Bullbo 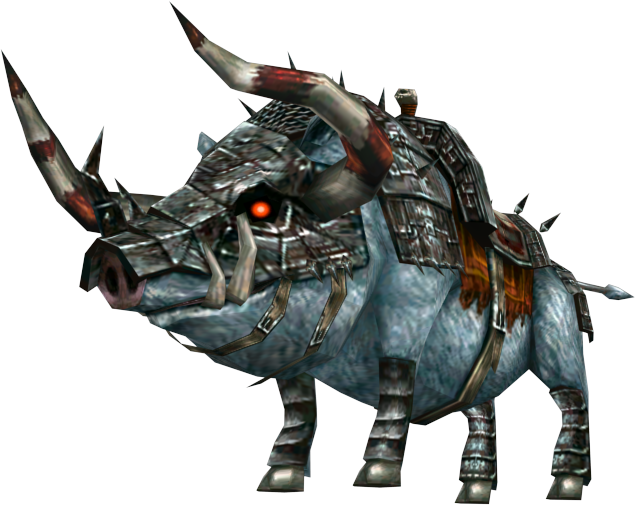 Lord Bullbo is King Bulblin's giant blue boar that he rides around on in Twilight Princess.

Despite his large body mass and heavy armor, he is the only Bullbo that can jump. He also is very fast, capable of maintaining the same speed as Epona.

Lord Bullbo is first seen when King Bulblin is also introduced at the Ordon Spring, where the pair takes Colin and Ilia before King Bulblin transforms the area into Twilight. He later appears alongside King Bulblin in Kakariko Village, where they kidnap Colin, leading to a battle in Hyrule Field, which culminates in a joust on the Bridge of Eldin. Link and Epona will knock the duo off off the bridge and down into the abyss.

Lord Bullbo resurfaces at the Great Bridge of Hylia, when Link and Telma are transporting Prince Ralis to Kakariko Village. Here Lord Bullbo will once again be alongside King Bulblin as they do battle with Link. This time Link will utilize Arrows to knock the pair off the bridge.

When Link challenges King Bulblin in the Gerudo Desert, just before the entrance to Arbiter's Grounds, Lord Bullbo is nowhere to be found. Instead, King Bulblin can be found in a chamber with a regular Bullbo, who he smacks away with his weapon.

Lord Bullbo appears once again after the final battle with King Bulblin at Hyrule Castle, where the two ride off, having now become an ally of Link.[1]

During the End Credits, the pair can be seen riding around in Hyrule Field.