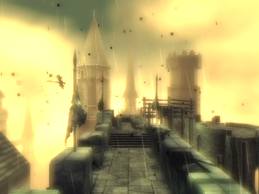 The Rooftop of Hyrule Castle in Twilight

"The dark clouds of dusk cover this land... This drape of shadows is called...twilight. In this twilight, those who lived in the light...become as mere spirits...it is a place...where the dark ones and evil creatures dwell..."

The Twilight is an alternate realm that parallels the Light Realm, which is where the Twili live as well as Zant and Midna. When Zant destroys three of the four Light Spirits, their respective lands become part of the Twilight. The spirits are mere small clumps of light when the light is gone. In the Twilight, Link becomes a wolf, Zelda is still herself, and Ganondorf is still himself. Everyone else becomes a spirit, being unaware that the Twilight has covered their land. Though they can see the twili people, the twili people don't bother them.