From Zelda Dungeon Wiki
Jump to navigation Jump to search
Want an adless experience? Log in or Create an account.
Land of Twilight 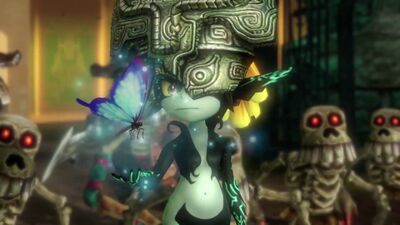 Midna with a Goddess Butterfly

Land of Twilight is the first scenario in the Twilight Princess set of the Hyrule Warriors Legend Mode. In the base game, it was one of the three branching scenarios available after completing The Sorceress of the Valley.

Completing it unlocks Midna as a playable character in the Wii U version & Hyrule Warriors Legends.

"Lana stepped through her portal and found a jarring sight.
Wherever she looked, the kingdom was consumed by shadow.
Though she knew of the Twilight Realm, she had never seen it firsthand.

Lana's sorcery could not reveal who or what was causing the Twilight to cover Hyrule so completely.
She soon came upon a small village beset by monsters. Her mission to close the Gate of Souls would have to wait..."