From Zelda Dungeon Wiki
Jump to navigation Jump to search
Want an adless experience? Log in or Create an account.
The Demon Lord 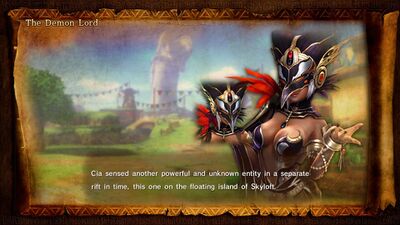 "Cia sensed another powerful and unknown entity in a separate rift in time, this one on the floating island of Skyloft.
When she arrived there, she found it already beset by a vast army of monsters. But who commanded them, Cia wondered.

The inhabitants of Skyloft were clearly overwhelmed. Many thought that the end of the world was at hand.
Fi, a servant of the goddess, fought alongside the humans, but the beasts' advance could not be stopped.
A great darkness would soon overtake Skyloft. Though Cia cared nothing for the fate of the villagers, she began formulating a plan.
Whatever being had brought these creatures to Skyloft would make a powerful servant. She would need to subjugate it and make it her own.

Launching herself into battle to defend Skyloft, Cia looked for an opportunity to weaken this dark power...and then add it to her forces."