Liberation of the Triforce

From Zelda Dungeon Wiki
Jump to navigation Jump to search
Want an adless experience? Log in or Create an account.
Liberation of the Triforce 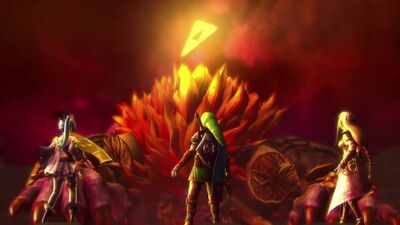 Liberation of the Triforce is the last stage of the Grand Finale arc of Legend Mode in Hyrule Warriors.

In the Wii U version, it is the final stage of Legend Mode; but in Hyrule Warriors Legends and Hyrule Warriors: Definitive Edition, it is followed by the final scenario in Linkle's Tale, The Other Hero, and by the Wind Waker arc beginning with A New Disturbance.

In Hyrule Warriors Legends only, completing it unlocks Cia as a playable character.

"After Zelda's triumph in Gerudo Desert...
Impa's forces managed to pinpoint Ganondorf's location.
He had conquered Hyrule Castle and transformed it in his own image. From this fortress, he prepared for an unspeakable ritual.

Link, Zelda and all of their allies...
from across the ages marched towards Ganon's Tower, ready for the final, decisive battle.
If they fell, all of Hyrule would fall with them..."