From Zelda Dungeon Wiki
Jump to navigation Jump to search
Want an adless experience? Log in or Create an account.
Ganondorf's Return 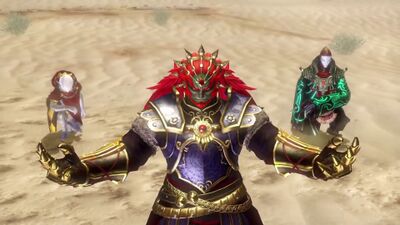 Ganondorf's Return is the first scenario in the Ganondorf set of the Hyrule Warriors Legend Mode.

"Link and his friends defeated Cia and her legions, returning peace to Hyrule.
But that peace would be short-lived.
At the moment when Link drew the Master Sword from its pedestal...
he had inadvertently broken the seal on the last spirit fragment's prison, setting it free to unite with the others.
His spirit made whole, Ganondorf was reborn.

His first act was to return to Gerudo Desert, the center of his power in Hyrule
Once there, he summoned the spirits of Zant and Ghirahim from their imprisonment to serve him.
Finally, Ganondorf would hold the complete Triforce in his hands and wield its full power.

Knowing his enemies were approaching, he built a stronghold in Gerudo Desert for the coming battles.
With Zant and Ghirahim at his side, Ganondorf was poised to conquer Hyrule.
The future was bleak for the forces of light."