A War of Spirit

From Zelda Dungeon Wiki
Jump to navigation Jump to search
Want an adless experience? Log in or Create an account.
A War of Spirit 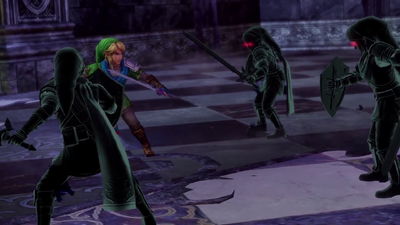 A War of Spirit is the second scenario in the Epilogue set of the Hyrule Warriors Legend Mode. The next and final scenario in the set is Shining Beacon, but Darkness Falls from the Cia's Tale set takes place between the two.

"At long last, Link took up the Master Sword and proved himself the Hero of Legend.
Armed as he was with the blade of evil's bane, Link easily dispatched the newly revived Wizzro.
The evil magician's parting words in their ears, Link and his allies set out to confront Cia at the Temple of Souls.

With a string of victories behind them, the Hyrulean army's morale had improved remarkably.
Even Link began to feel that he was invincible while the Master Sword was in his hands.
Soon he was allowing overconfidence to cloud his judgment, rushing headlong into hordes of enemies.
Cia had been waiting for Link to overextend himself, giving her a chance to strike.

And as the two sides battled, unknown eyes watched from the shadows..."