This article is about the Hyrule Warriors scenario. For other uses, see Water Temple (Disambiguation). 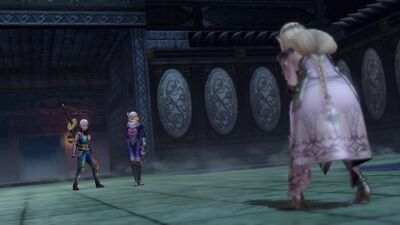 Land of Myth is the second and final scenario in the Ocarina of Time set of the Hyrule Warriors Legend Mode.

"At the fairy's request, Impa had fought her way to the summit of Death Mountain to rescue Princess Ruto.
There she subdued the Goron chieftain, Darunia, who had temporarily lost his senses.
Upon freeing Princess Ruto, however, Impa was shocked to learn the reason for the conflict between the Zora and Goron people.
The ancient Water Temple was teeming with monsters that poured from the Gate of Souls.
What's more, the monsters were apparently led by Princess Zelda herself!

Hoping to make sense of this disturbing revelation...
Impa and her newfound allies journeyed to Lake Hylia.
When they arrived, they were greeted by a Zelda seemingly consumed by evil..."