From Zelda Dungeon Wiki
Jump to navigation Jump to search
Want an adless experience? Log in or Create an account.
Gate of Souls 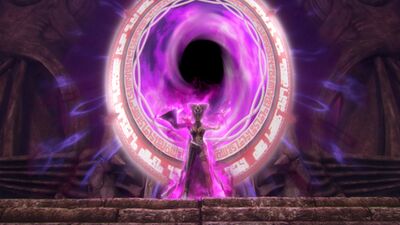 The corrupted Cia in front of a Gate of Souls

A Gate of Souls is one of a series of temporal portals in Hyrule Warriors, generated by Cia or Lana. They can be used to travel to other times, or to bring people and items from other times to the present day.

A "great sorceress" - the original Guardian of Time - used a Gate of Souls to peer into other times and watch over the balance of the Triforce from the Valley of Seers. However, she became enamoured with Link, and the weakened spirit of Ganondorf used this obsession to split her in two, driving the light from her soul. The remaining "Dark Sorceress", Cia proceeded to open the Gate of Souls wide and bring an army of monsters from throughout history to the present day, aiming to conquer Hyrule and possess Link's soul.

The driven-out "light" from her soul incarnated separately as the "Light Sorceress" Lana, who joined with Link, Impa, Sheik and the remains of the Hyrulean Army to try and stop Cia. However, Cia took the Triforce of Courage and Triforce of Wisdom from Link and Sheik respectively, and with the Triforce of Power already in her possession, used the power to open Gates of Souls in three other times - the Sky Era, the Era of the Hero of Time and the Twilight Era - where fragments of Ganondorf's spirit had been sent and sealed away. The heroes managed to travel through and close these Gates of Souls, but not before Ganondorf had reincarnated.

Cia continued to use Gates of Souls to summon more and more monsters to her side, but drained her own lifeforce in doing so, fading from reality and into the possession of Phantom Ganon of another world. With her apparent death, Lana took the Triforce of Power, and opened Gates of Souls to return their allies to their own time. With Ganondorf's resurgence, however, she would summon them back through another set of Gates of Souls soon after when facing defeat at the hands of his lieutenants Ghirahim and Zant in Gerudo Desert.

After Ganondorf's defeat, Phantom Ganon would make his own move, opening Gates of Souls in Gerudo Desert to distract the heroes, while using Cia's power to his own ends.