From Zelda Dungeon Wiki
Jump to navigation Jump to search
Want an adless experience? Log in or Create an account.
Twilight Era 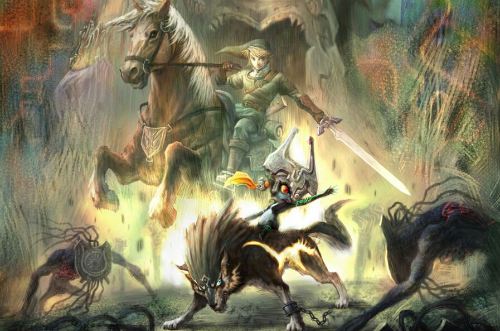 The Twilight Era describes the events prior and during Twilight Princess. This Era takes place years after the events of Ganondorf's Execution, where the Demon Thief was sent to Arbiter's Grounds to be punished after the Hero of Time revealed his true intentions. Within this Era, a strange matter known as Twilight shrouds over Hyrule as the Shadow King, Zant, plots to take over.

Invasion of the Shadow King

After the Ancient Sages failed to execute Ganondorf, they banished him into an alternate world to Hyrule, known as the Twilight Realm.[1] It is here where Ganondorf encounters Zant, a member of the Twili. Zant was previously in line for the throne, but was snubbed, according to Midna, because Zant's eyes showed lust for power; the same lust that got the Twili banished to the Twilight Realm in the first place.[2] Zant looked to the heavens for an answer and this is where he encountered his supposed god, Ganondorf. The Evil Demon housed his power within Zant at one request: that he merges shadow with light and create darkness.[3][4] Zant took this power and usurped the throne of the Twili; he overthrew the current leader, Midna, and turned her into an imp. Zant turned the rest of the realm's inhabitants into mindless Shadow Beasts and ordered them to steal the light from the provinces within Hyrule. The Usurper King then invaded Hyrule Castle,[5] where he forced Princess Zelda to give up the throne, thus allowing the perpetual Twilight to shroud the Kingdom.

A local rancher of Ordon Village, named Link, gets involved within the plot when he is attacked by King Bulblin. After waking up in the form of a wolf in Hyrule Castle, he encounters the mysterious imp, Midna, who helps him escape his imprisonment. When returning to his home village, he speaks with one of the Light Spirits of Hyrule, Ordona. The young hero learns that he must travel to the three provinces across Hyrule and restore the light. Link successfully rids the Twilight of Faron, Eldin, and Lanayru.[6] Along the way, him and Midna collect a dark and ancient power known as the Fused Shadow.[7]

Restoring the Mirror of Twilight

After the young hero restores the light to Hyrule, he encounters Zant in the Lanayru Spring. Zant gravely injures Midna,[8] and also curses Link.[9] After going through the Castle Town Sewers to Princess Zelda's Chambers, Zelda revives Midna[10] and tells of the place where Link can unlock himself from his wolf form. The young hero and Midna travel to the Sacred Grove, where they find the famed Master Sword, which was the key that Zelda previously referenced. The two then travel to the Arbiter's Grounds to find the Mirror of Twilight, which is the only known connection to the Twilight Realm[11] and more importantly, Zant. However, the Mirror was previously broken into three separate fragments by the Shadow King.[12] Link traverses to the hidden places within Hyrule and finds the three missing shards, thus restoring the Mirror.

Battle with Zant and the Recovery of Ganondorf

Link enters the Twilight Realm through the Mirror, where he finds the Palace of Twilight. After returning the Sols to the main plaza, Link's Master Sword gets infused with light. With the power of light now within his grasp, the young hero enters Zant's Palace, where he encounters the Usurper King. After Zant throws a tantrum of sorts, the two battle it out in which Link comes out on top. After revealing that his god, Ganondorf, has returned, Midna uses the full power of the Fused Shadow to finally kill Zant.[13] With the help of Midna and The Resistance, Link breaks through the barrier surrounding Hyrule Castle and proceeds to the castle itself.[14] After traversing to the Throne Room, Link and Midna encounter Ganondorf seating on the throne.[15] Link defeats him[16] and the Light Spirits restore Midna to her original self. Link and Zelda follow Midna as she departs Hyrule; however, Midna shatters the mirror as she leaves,[17] the only known connection between the two worlds. This era ends with Link returning the Master Sword to the forest and the blessing of the gods blanketing Hyrule in light.[18]