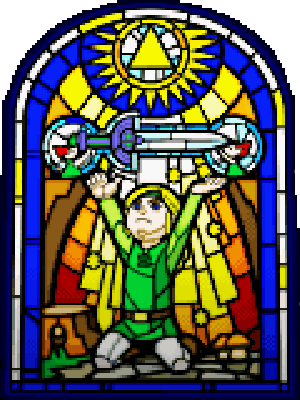 The Force Era takes place after the events within the Era of Prosperity and the establishment of Hyrule. It is the era where both The Minish Cap and Four Swords take place. It happens prior to the events of the Era of the Hero of Time, which occurs throughout the time frame of Ocarina of Time.

The Hero of Men

During the establishment of Hyrule within the Era of Prosperity, the Kingdom knew many years of peace, however this was short-lived. Evil once again threatened the Kingdom as monsters sought to bring Hyrule into darkness once more.[1] It was at this moment that a race known as the Picori descended from the sky.[2] They bestowed the Hero of Men with a golden power and a powerful sword.[3] The golden power was known as the Light Force[4] while the sword was named the Picori Blade. The hero managed to use his new profound powers and sealed the monsters within a chest.[5]

The chest, in which the monsters where trapped, was sealed with the powerful Picori Blade and was watched over by the Royal Family.[6] They kept the whereabouts of the mysterious race, the Picori, a secret.[7] Peace was once again restored to the land and a festival was held on an annual basis to celebrate the Picori.[8]

The Festival and Vaati

The one hundred year anniversary of the Picori Festival beckoned[9] and it was a custom that each year a person would be able to touch the legendary blade. This year Vaati was chosen however he breaks the famed sword and intends to obtain the Light Force.[10] It soon became known that the Light Force was nowhere to be seen, subsequently Vaati releases many monsters that were once sealed within the chest.[11] Vaati, in anger, turns Princess Zelda into stone and goes off to search for the golden power.[12]

Hero of the Minish

The Princess could only return to her true form with the power of the Picori Blade,[13] however due to it being broken, she remained in her current state. The King of Hyrule, at Master Smith's suggestion, asks a young boy named Link to repair the blade with the help of the Minish.[14] Link then starts his epic journey to restore the Picori Blade to its former glory. After meeting with a tribe known as the Minish, Link comes across a mysterious figure known as Ezlo.[15] He teams up with the hat like being on his quest to find the Four Elements.[16] After finding all four Elements, Link infuses them with the Picori Blade in the Elemental Sanctuary.[17] The Picori Blade now becomes the Four Sword.[18] Vaati continues to search for the whereabouts of the Light Force and breaks into Hyrule Castle. The evil sorcerer takes control of the King and orders the castle's soldiers to search for the relic.[19] It soon dawns to Link that the Light Force is held within Princess Zelda, as it was passed down through many generations.[20] Vaati then kidnaps Zelda and takes her back to the, now cursed, Hyrule Castle. The young hero manages to fight his way through the monsters and reaches Vaati. Link then arrives just before he manages to complete the ceremony.[21] After Link defeats the Evil Mage, the Princess and Ezlo return to their original form and peace is restored to Hyrule.[22]

The Return of Vaati

Briefly after his defeat, Vaati reappeared and terrorised Hyrule one again.[23] He kidnapped many of the women within the King and brought them to his Palace.[24] However it was at this moment that a hero wielding the legendary blade, known as the Four Sword, appeared.[25] He managed to defeat the Wind Mage and seal him within the Four Sword in the Sanctuary.[26]

For many years the seal was left unbroken and the Sanctuary was watched over.[27] One day the seal begins to weaken and the Princess of that era goes to investigate.[28] The seal is then broken by the evil Vaati and Princess Zelda is tasked by Vaati to his lair.[29] A young boy named Link witnesses these tragic events and decides to wield the powerful sword, at the request of the Great Fairy.[30] Before the fairies allow the young hero access to Vaati's Palace, they tell Link that he must prove his courage.[31] After doing so, they aid Link in reaching the Palace. Link then defeats the powerful mage Vaati and rescues Princess Zelda.[32] Vaati is once again sealed within the Four Sword and the people of Hyrule were tasked with keeping a close eye in case history was to repeat itself.[33][34]