The Tragedy of Princess Zelda I

From Zelda Dungeon Wiki
Jump to navigation Jump to search
Want an adless experience? Log in or Create an account.
The Tragedy of Princess Zelda I 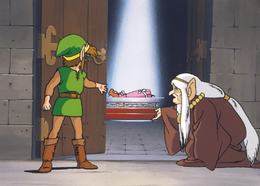 The Tragedy of Princess Zelda I refers to the series of events that leads up to a sleeping spell being cast on the Princess Zelda I seen in The Adventure of Link. This was originally intended to explain the "legend of Zelda," with the Prince of Hyrule issuing a decree that all princesses should be named "Zelda." However, this princess's position as the first Zelda has been retconned according to Hyrule Historia, and the "legend of Zelda" has been replaced with the story in Skyward Sword.

Hiding the Triforce of Courage

After the events of A Link to the Past, the Triforce returned to the hands of the Royal Family and the kingdom experienced an age of prosperity. The Triforce was passed down from generation to generation[1] until one king deemed his son unworthy to wield the responsibility of the Triforce.[2] Rather than have its full power corrupt the prince, he hid the Triforce of Courage so the prince could only inherit the Triforce in part.[3] He also cast a spell such that when someone worthy of the Triforce appeared, the mark of the Triforce would appear on his hand.[4]

The new King was angry that he could not inherit the full power of the Triforce, [5] so he searched throughout the land but to no avail. It was then that a Wizard appeared and told the young King that Princess Zelda knew the location of the relic.[6] The King searched for the Princess and when found, he demanded the location of the Triforce of Courage. However, the Princess kept to her word in honor of her father and the good of Hyrule.[7] In fury, the Wizard put Zelda to an eternal sleep.[8] However, soon after, the King regretted his mistake and took the Princess to the North Castle where she was laid to rest.[9] The King then stated that every Princess following were to be named after Zelda.[10] With the location of the Triforce only known by Princess Zelda, who was in an eternal slumber, the Kingdom of Hyrule slowly decayed and decreased in size.[11]