Banishment of the Twili

From Zelda Dungeon Wiki
Jump to navigation Jump to search
Want an adless experience? Log in or Create an account.
Banishment of the Twili 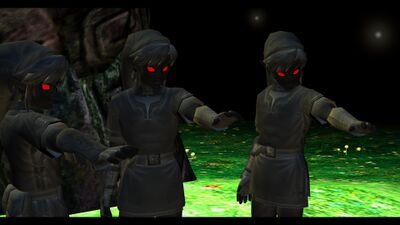 Banishment of the Twili[1] is an event that is part of the prelude of Twilight Princess. However, it takes place in the Timeline after the events of Skyward Sword and prior to the events of The Minish Cap.

The Twili were once regular people of Hyrule, although they had powerful magical abilities. Using these abilities, these Interlopers attempted to take control over the Triforce. In order to protect the Triforce from falling into their hands, the Goddesses sent the Spirits of Light to intervene. The Light Spirits used the Mirror of Twilight to banish these usurpers into the Twilight Realm. The Light Spirits then sealed the power of the Twili into the Fused Shadows. Over time, these usurpers became known as the Twili and were forever barred from returning to the Land of light.

When the Twili were banished from the world of light, they lost most of their powerful abilities, although some still posses some magical power, including the ability to teleport. Despite their banishment, the Twili lived in peace for ages, with their hearts purified in the gentle evening glow of a beautiful, if lonely, realm.[2]