From Zelda Dungeon Wiki
Jump to navigation Jump to search
Want an adless experience? Log in or Create an account.
Shadow Era 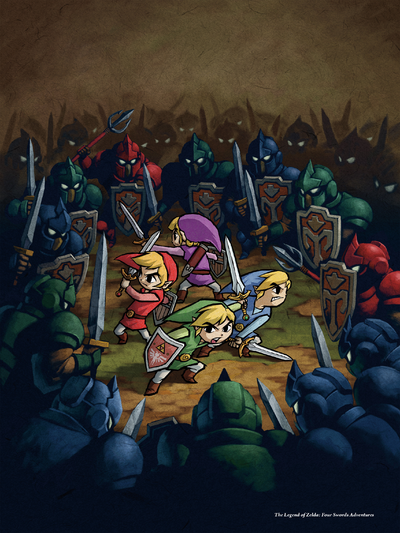 The Shadow Era is an event that takes place centuries after the defeat of Ganondorf in the Twilight Era, which occurred within Twilight Princess. The following events take place before and throughout the majority of Four Swords Adventures. This event Era describes the reincarnation of the Evil King Ganondorf and his attempt to cover Hyrule in darkness.

Centuries after the initial death of Ganondorf in the Twilight Era,[1] peace had once again returned to the Kingdom.[2] The relationship between the Gerudo tribe and the rest of Hyrule grew strong,[3] in contrast to previous conflicts. However, a new male was to be born among the race, as was the hundred year tradition within the tribe.[4] This was the second coming of Ganondorf, and he deified the new ways of the tribe.[5] The Evil King sought after a powerful relic known as the Trident. This sacred power was hidden within the Ancient Pyramid, in which Ganondorf gained entry to. After gaining the Trident, Ganondorf obtained the Dark Mirror from the Temple of Darkness and proceeded to bring darkness to Hyrule.[6] Within his devilish plot, Ganondorf attempted to revive the Wind Mage Vaati,[7] and create a dark version of Link, known as Shadow Link.[8]

One day in the Kingdom of Hyrule, Princess Zelda grew wary of the seal on the evil sorcerer Vaati.[9] In a moment of panic, Zelda called upon the six Shrine Maidens and Link to watch over the Sanctuary.[10] The moment they opened the gates to the Sanctuary, Shadow Link appeared and he trapped the Six Maidens within separate crystals.[11] The dark persona of Link then fled into the portal in which lead to the Dark World, while Link followed in pursuit. The young hero then drew the Four Sword from the Sanctuary and in the process released Vaati.[12]

The ancient sword allows Link to split into four separate bodies.[13] Ganondorf sought to corrupt the Knights of Hyrule, turning them into monsters.[14] After rescuing the Six Maidens and obtaining all of the Royal Jewels, Link enters the Tower of Winds,[15] which later leads onto the Realm of the Heavens. Link finds the Dark Mirror and Princess Zelda aids Link in gaining access to the Palace of Winds; Vaati's lair. Link defeats Vaati and the Palace begins to collapse; it's at this moment that Ganondorf appears before Link. Aided by Princess Zelda, Link is able to defeat Ganondorf and seal him and Vaati within the Four Sword.[16] With peace restored to the Kingdom, Link returns to Hyrule Castle to a celebration in which he is labeled as a hero.[17]